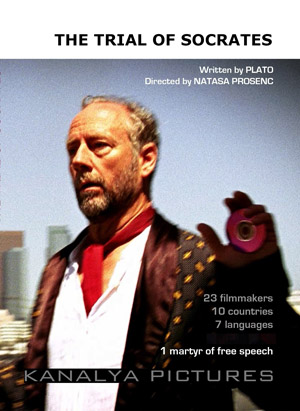 What motivated you and Natasa to start the project?

Natasa Prosenc Stearns is the director of "The Trial of Socrates". We had already made one feature film together ("Souvenir") and were looking for our next project. She was educated in Europe where philosophy is a regular part of a high school education. As we were working on story ideas, she made several references to Plato, making me aware that I knew little about the works of Plato. As a remedy, I read the complete works of Plato, and was galvanized to make his ideas more accessible.

Could you reflect on the multi-dimentional structure of the film (different countries/eras)?

We had a number of aims with that strategy. The first is that it mirrors Plato's custom of citing multiple sources to support the reliability of his accounts.
The second has to do with our experiences at film festivals. We had seen many excellent short films where the directors were obviously ready to make feature films but did not have the financial or production backing to do so. By having a number of directors make short sections we could give several filmmakers their first chance to direct at least a portion of a feature film, hopefully helping these talented individuals to boost their careers.
Additionally, the multiple sections allowed us to emphasize the universality of Socrates' words, by using different languages and by portraying Socrates in a number of different forms.

What is the goal/purpose of the film?

We wanted to bring the world together, symbolically, through an ancient text that is the common heritage of all humanity. The works of Plato are often cited as the beginning of Western Thought, but every part of the world has some connection to Plato, and through him Socrates. Anyone involved in any "academic" enterprise makes reference to Plato's school, the original "Academy" of Athens.
Socrates took the occasion of his trial and his sentence to death to explain his life. In his defense, his "apology" for his life, he pointed out to all of us a good way to live our own lives: full of inquiry and wonder, and unafraid of death.

Truth is accessible to everyone through personal reflection and through dialog with others.

Socrates reminds us to think critically, to examine ourselves, and to live our lives for others.

Could trace the connection between "The Trial of Socrates" and your new film "Plato's Symposium"?

In both cases we were drawn to lasting, enduring quality in Plato's work which travels through time without losing its value and potency. Film Plato's Symposium is another attempt to "translate" Plato's oeuvre into a film medium in a new, contemporary, creative, imaginative way. While in Trial of Socrates we were addressing the truth, in Symposium we discus love, eroticism, happiness - which are all themes that are as alive and important today as they were when these works were written.